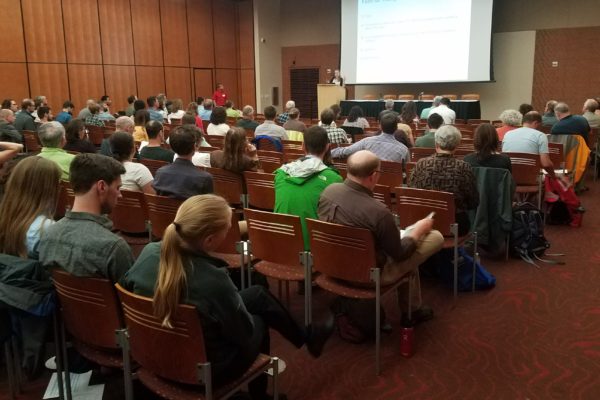 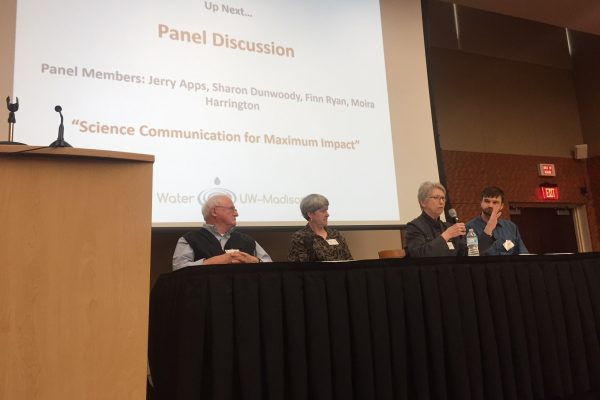 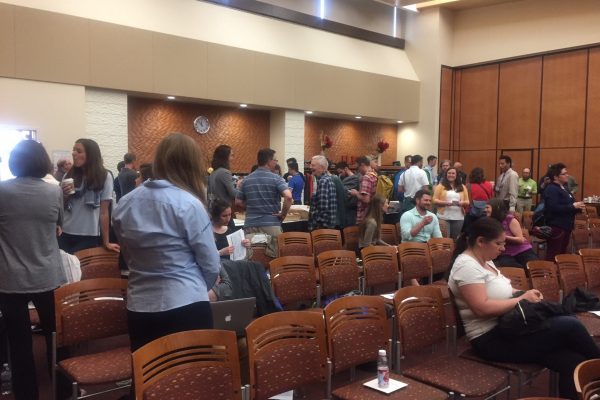 Attendees take a break from talks for coffee and discussion

On the morning of May 9th, 2018 Water@UW-Madison hosted its second annual symposium of water research at the Gordon Dining and Event Center. Similar to prior Water@UW-Madison symposia, this half-day event was designed to allow UW water researchers to network and share their research and to engage with water professionals and researchers from outside organizations and other university campuses. 24 speakers presented on a broad range of water research topics in several sessions of 5-minute “speed talks,” which were followed by 15-minute coffee breaks to allow for questions, conversation, and inter-organizational networking. At least 8 different UW-Madison departments were represented by the talks in addition to guest presenters from the Wisconsin Department of Natural Resources, United States Geological Survey, Madison Metropolitan Sewerage District, Madison Water Utility, the Healing Our Waters Coalition, UW-Milwaukee, Marquette University, the Wisconsin Sea Grant Institute, and UW Cooperative Extension.

Recognizing the importance of effective science communication between researchers, educators, policymakers, and the public, Water@UW-Madison selected “Connecting People and Water Scholarship through Better Communication – On Campus and Beyond” as the theme for the symposium. In addition to the speed talks, each session was concluded by a featured “Science Storyteller” who gave 10-minute presentations about the successes and challenges they have had in communicating science through a variety of media and giving advice to researchers on techniques for communicating their work to different audiences. This year’s storytellers were Sharon Dunwoody – Professor Emerita of Journalism and Mass Communication at UW-Madison, Finn Ryan – an Emmy-nominated environmental filmmaker, and Moira Harrington – Assistant Director for Communications at Wisconsin Sea Grant. Additionally, author and UW Professor Emeritus Jerry Apps gave a keynote presentation on the vital importance of protecting water resources and the importance of using story to effectively communicate your research. In keeping with the theme, speed-talk speakers were challenged to incorporate the communication techniques presented by the storytellers and keynote into their 5-minute presentations. The talks were also concluded by a panel composed of the featured speakers that fielded questions on “Science Communication for Maximum Impact.” For the complete schedule, see here.